About the show - how it all started

Prior to my beginning this show, there was an annual show at the Santa Rosa El Rancho Motel and Convention Center.  The promoter of this show was Jim Keegan.  The El Rancho was demolished as that area was slated for re-development so Jim Keegan and partners decided to move the show to Fremont in the East Bay. They thought that Fremont would be a better location since it was closer to airports and lodging.

Since I reside in Santa Rosa and the lodging and venue options were more affordable (helping to keep exhibitor costs down), I felt motivated to keep the show in Santa Rosa. So I organized my own show and in 1994 called it the SANTA ROSA ANTIQUE FISHING SHOW.  Ironically, Jim Keegan was one of the first vendors to sign up for a table. A couple of shows later I changed the name to the SANTA ROSA FISHING TACKLE, DUCK DECOY AND SPORTING COLLECTIBLE SHOW. And now most often, people have come to refer to it as "Red's Show" hence the name of the website.

The show started with 25 vendor tables in a side room at the Santa Rosa Veterans Bldg, which is where we currently hold the show. Since that time, the show has grown to approximately 150 vendor tables and we now occupy the main hall sometimes overflowing into the front lobby area.

We have grown into the largest sporting collectible show of its kind on the West Coast. 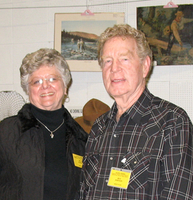